The arts and crafts of West Bengal is recognized across the world, some of the most famous types being Terracotta and clay works, Dokra metal craft and its various embroidery styles. Among these, one that has risen in recent times and is also one of the most famous handicrafts in the state is none other than the famous Bengal pottery, which is crafted in exquisite styles and beautiful variations.

Pottery is primarily prevalent across the rural parts of West Bengal, where the men and women of the Kumhar community become engaged in this art. Traditionally the potters of West Bengal come from a caste called the “Kumbhakars”, directly translating to the “pot-makers”. The only exceptions are the Muslim potters at Murshidabad. An indigenous art, pottery, has been practiced meticulously in the state for generations. The most popular pottery forms arising from the districts of Bankura, Murshidabad and Midnapore in West Bengal.

The pottery in West Bengal comes in many varieties, all of which wholly built from clay, despite their purposes of usage and distribution being diverse. But for all types of pottery forms, the fundamental provisions and method remain almost identical for each. Clay is sourced from several places, like a river bed, ditches and pits, and blended together. They ensure that the clay is from two to three sources and is mixed together to give a robust clay body. It is then worked on the wheels to mould it into the shape of the expected items, varying from simple pots to exquisite idols.

The women from these kumbhkar families do not work the pots on the wheel; instead, they execute the beaten bottoms of round pots and solid clay pots and dolls. The upper half of the rounded clay pots are instead made on the wheel. These items are then sundried and baked to make them solid and firm. The women complete, design and decorate these items.

Figurines of the Goddess Lakshmi, Saraswati, Lord Jagannath are created for worship. These are either in solid form or made using burnt clay moulds. Large images of Goddess Durga and Lakshmi are modeled on straw armatures and are left unburned. The pottery centers in Kolkata and the Sunderbans make storage pots with dimensions of 2 meters in height and 1 meter in diameter.

West Bengal has primarily four famous kinds of pottery coming from the Manasha Ghats, Mangalghats, Tulsimancha and Lakshmi Ghat. Each of these has different uses and are its specialty. Apart from being traditionally practiced, this craft also has a commercial angle to promote small-scale industries state-wide. These potteries can be seen for domestic and ceremonial objectives and even displayed at notable art galleries worldwide.

Mangal Ghats, as the meaning derived from the name, this type of pottery is meant for auspicious purposes. It is colourful and vibrant. It is also an essential and revered religious item in almost every Hindu household in Bengal. You can also find this style of pottery being used for holy ceremonies, like birth rituals, marriages, and similar events.

From Lakshmi Ghat originates another kind of pottery in West Bengal, but this one specializes in pairs. A good couple of this style of ceramics can be seen in the craft of dual pots, signifying Lakshmi, the Goddess of Wealth, while the other for Lord Ganesha, the God of Success.

Manasha Ghat is yet another style of pottery described as a sort of earthenware that is painted on dedicated to the homage of serpent goddess ‘Manasha’. In this, usually, the face of the Goddess and the hoods of the snake are painted on to upturned earthen jars.

This final style of Tulsimancha pottery is made up of clay and bricks and is ornamented beautifully with several Gods and Goddesses related motifs. Among these, the most notable pattern of Tulsimancha is one depicting Lord Krishna and Radha. 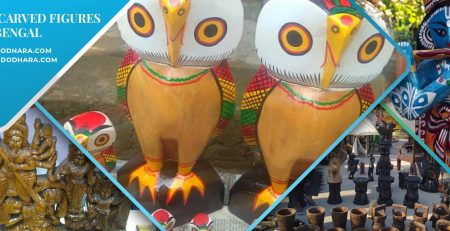 Wood carving in India is an age-old practice and has been around since the ancient wood carved temples in... read more 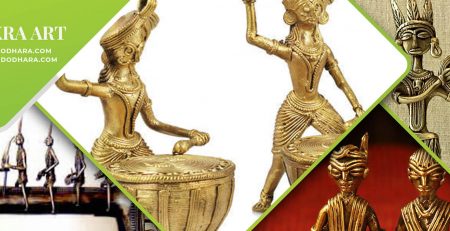 India’s cultural diversity is highlighted through its various cultures. An example of this is in the country’s handicrafts that... read more 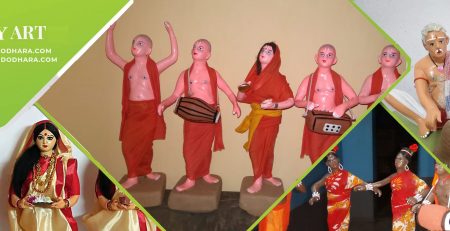 The Enchanting Claydolls Of Krishnanagar

The craft that arises out of West Bengal is renowned all over the world, mainly because of its rustic... read more